Ballot language doesn’t get much more complicated  than Amendment B, the legislatively referred measure to repeal the Gallagher Amendment.

The ballot language says, “Without increasing property tax rates, to help preserve funding for local districts that provide fire protection, police, ambulance, hospital, kindergarten through twelfth grade education, and other services, and to avoid automatic mill levy increases, shall there be an amendment to the Colorado constitution to repeal the requirement that the general assembly periodically change the residential assessment rate in order to maintain the statewide proportion of residential property as compared to all other taxable property valued for property tax purposes and repeal the nonresidential property tax assessment rate of twenty-nine percent?”

What would repeal mean?

Property tax assessment rates would be frozen at their current level of 29% for commercial and 7.15% for residential. Increases in mill rates would be subject to TABOR restrictions. Repeal would take pressure off commercial taxpayers but could result in a larger share of taxes being paid by homeowners.

The language doesn’t mention the word “Gallagher,” but then, neither does the state constitution’s Article X.

Passed in 1982 with 65.5% of voters in favor, the so-called Gallagher Amendment does three major things:

Authors of Gallagher anticipated that local governments would increase or decrease mill levies to make up for tax-revenue fluctuations.

Since the passage of the Taxpayers Bill of Rights, TABOR, in 1992, however, local governments, which are the only units of government that use property taxes, can adjust mill levies down but not up without a vote of the public.

As school districts and other local governments ask voters for mill-levy overrides — which they do regularly — the impact of those increases affects commercial properties to a greater extent than residential.

Amendment B, supported by 70% of the Legislature, including both Republicans and Democrats, hopes to repeal Gallagher and freeze tax rates at their current levels — 29% for commercial property and 7.15% for residential.

Sandra Solin, CEO of Capitol Solutions and lobbyist for the Northern Colorado Legislative Alliance, the advocacy group for the chambers of commerce in Northern Colorado, said businesses consider repeal a necessity.

“Without repeal, commercial property assessment rates will be four times that of residential. That’s concerning,” she said.

The commercial rates are among the highest in the country and have an impact on business recruitment and expansion, she said.

For tenants, the escalating commercial taxes show up as part of triple nets, which in some cases are now as high as base property rental rates.

The Legislature, in its referral of Amendment B to the ballot, intended to freeze assessment rates where they are today, Solin said. “There’s a corresponding bill that freezes rates at current levels,” she said. “Under TABOR, rates can’t go up without a vote.” That corresponding bill is Senate Bill 20-223, which declares a moratorium on changing the valuation of any class of property. The bill, which passed into law, takes effect only if Amendment B passes.

Chambers of commerce in much of the state, including those in Northern Colorado and the Boulder Valley, have come out in favor of repeal of Gallagher.

As John Tayer, CEO of the Boulder Chamber noted, communities without a substantial commercial base outside the Front Range are hit the hardest. The residential assessment rate is applied statewide, even if residential properties are not increasing, which can be the case in many rural counties.

So while taxes paid by residential property owners along the Front Range may increase despite the assessment-rate reductions — because market values increase faster than the assessment rate declines — in rural areas, taxes paid may decline, and lack of commercial properties means that dollars that support schools and local governments decline.

That places pressure on the state to backfill those taxes using sales-tax collections at the expense of highway or higher-education spending.

The Colorado Department of Local Affairs predicts that residential values will increase by 10% over the coming year while commercial values will decline by 20%.

Reeves Brown, project coordinator for Building a Better Colorado, which supports repeal, said that reductions in commercial values will prompt further declines in residential assessment rates in order to maintain the residential/commercial ratio.

Currently, residential property accounts for 79.54% of all property in the state, compared with 53.20% when Gallagher was passed, according to information from the Legislature’s Joint Budget Committee. Meanwhile, the residential share of the total property-tax bill remains at 45% of taxes paid as required by the constitutional provision of Gallagher.

Despite the disparities in how the law affects regions of the state and classes of property, it remains a driver of reductions in property taxes that would otherwise be paid by homeowners. For that reason, groups such as the Independence Institute, the Apartment Association of Metro Denver, Protect Our Homes and others oppose the repeal.

“I think Gallagher has done good for Colorado. It doesn’t need to be tossed out,” said Ron Stewart, a former state senator and former Boulder County commissioner. Stewart, along with Dennis Gallagher, was among the Senate Finance Committee members who authored what became the Gallagher Amendment.

“There could be tweaks to it, but it has kept residential property taxes at a reasonable level,” Stewart told BizWest. “It’s important to have a system that doesn’t cause a tax rebellion,” he said, in reference to what he termed a rebellion in 1992 when TABOR was passed.

Stewart, among other opponents, said that Gallagher has saved homeowners $35 billion in taxes that they otherwise would have paid, including $2.8 billion in the last year alone.

If the repeal passes, “expect residential taxes to double over the next 30 years over what they would otherwise be” under Gallagher, Stewart said.

Stewart said potential “tweaks” could include making Gallagher apply only in areas where residential values are growing, permitting local governments to increase mill levies without a TABOR vote under certain circumstances, and making the measure effective only on primary homes, not vacation homes or rental homes.

“It’s the only tax measure that benefits the average Coloradan,” Stewart said. 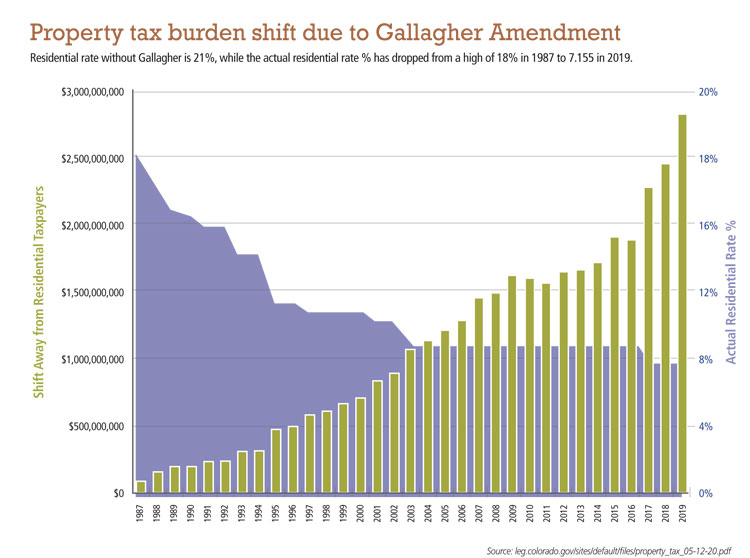 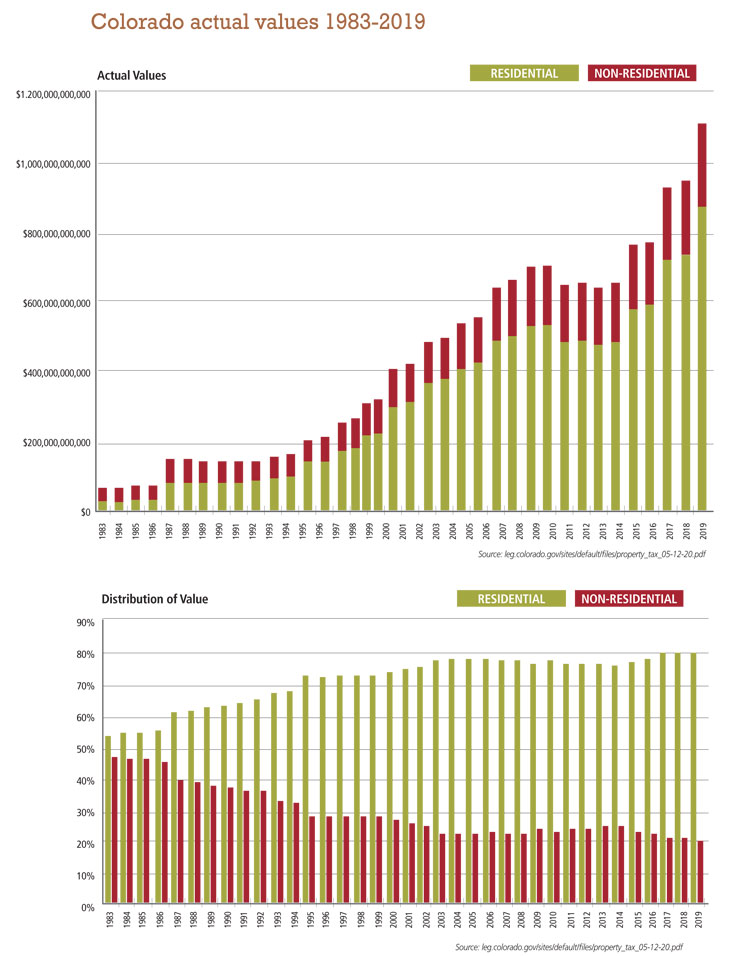 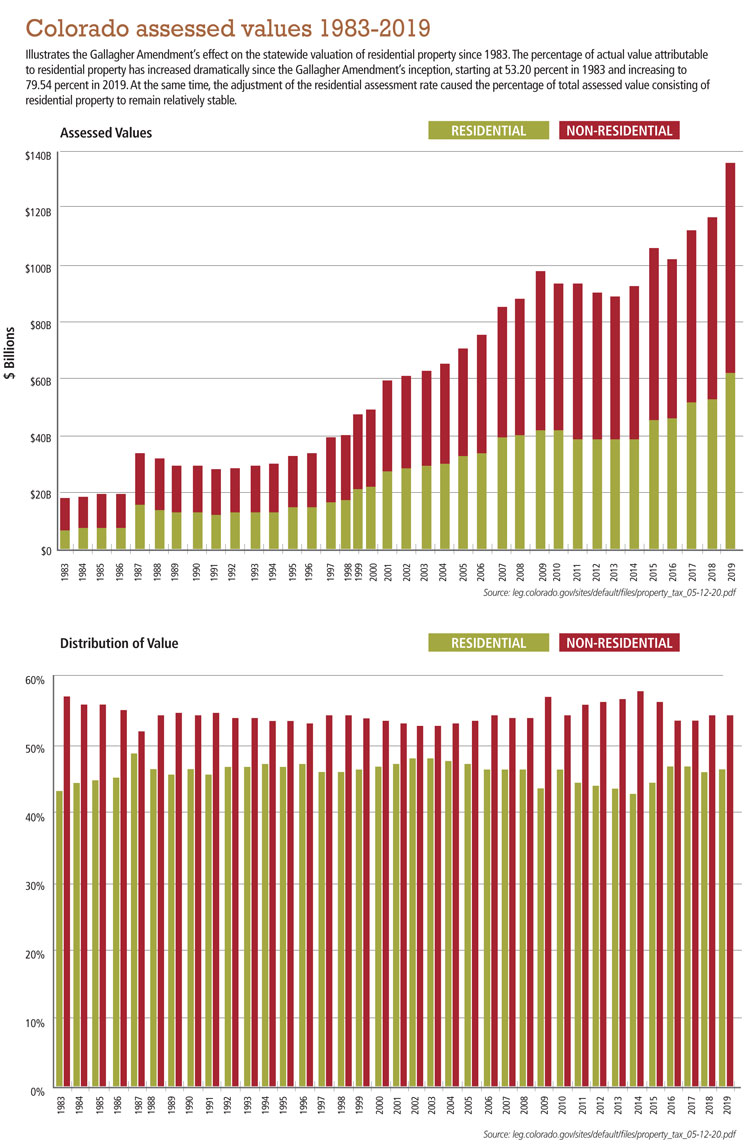 Ballot language doesn’t get much more complicated  than Amendment B, the legislatively referred measure to repeal the Gallagher Amendment.

The ballot language says, “Without increasing property tax rates, to help preserve funding for local districts that provide fire protection, police, ambulance, hospital, kindergarten through twelfth grade education, and other services, and to avoid automatic mill levy increases, shall there be an amendment to the Colorado constitution to repeal the requirement that the general assembly periodically change the residential assessment rate in order to maintain the statewide proportion of residential property as compared to all other taxable…