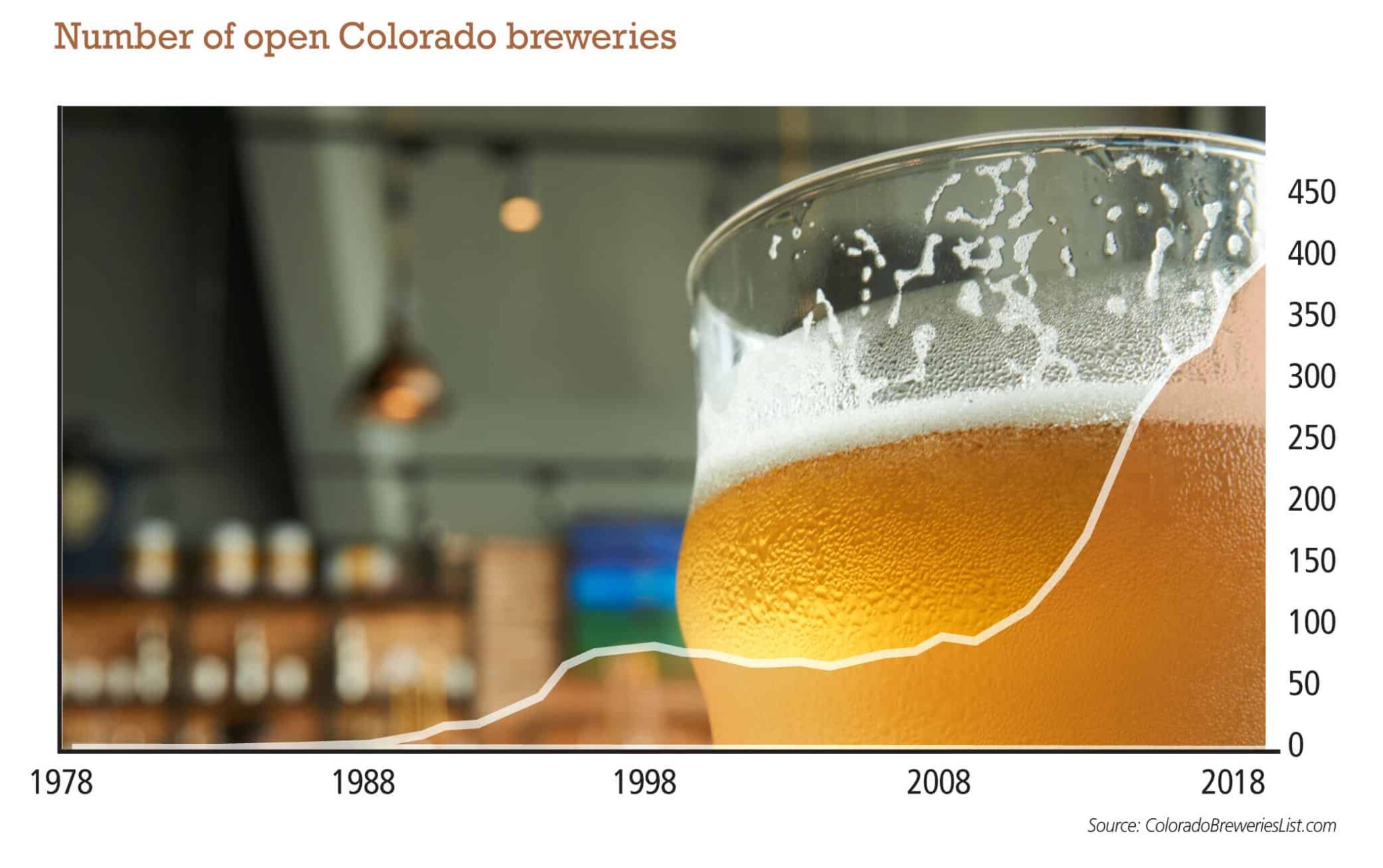 As a science fiction-themed brewpub that was launched in late February in east Longmont, Outworld Brewing’s mission is to boldly go where no taproom in the region has gone before.

But will it live long and prosper?

“Things have gotten a lot more competitive,” said Bart Watson, chief economist for the Boulder-based Brewers Association, “particularly on the Front Range, where we have one of the highest brewery densities in the country, if not the world.”

Outworld is steering into a maelstrom of competition in the Boulder Valley and Northern Colorado, and the early weeks of 2020 have been anything but boring for the craft brewing industry.

Brewstillery, a brewery/distillery restaurant developed by Durango-based Ska Brewing and Palisade-based Peach Street Distillers, will open this month in the Boulder space vacated by Fate Brewing Co., which declared bankruptcy in 2019.

A new brewery is expected to open shortly in the east Boulder spot vacated by Wild Woods Brewery, which Jake and Erin Evans closed in January after more than seven years in business.

Greeley brewer Nick Armitage is getting set to open a brewpub called Peculierales in the third and last commercial space in the historic and refurbished Windsor Mill in Windsor.

Idaho Springs-based Westbound & Down Brewing, which was named Midsize Brewpub of the Year at last year’s Great American Beer Festival, is breaking ground for a restaurant and 20-barrel production brewery on the 2.5 acres it bought next to Stem Ciders in Lafayette.

Four Noses Brewing will open a taproom called Oak Addendum in April next to Upslope Brewing in east Boulder.

According to ColoradoBreweryList.com, May will bring the opening of HighlandLake Brewing Co. in Mead, with Lost Scout Mead in Fort Collins due in June, Stodgy Brewing Co. coming to Fort Collins in July, and a score of others in the region in the concept or planning stage.

All this as the industry still figures out to cope with last year’s expansion of full-strength beer sales to grocery and convenience stores, as well as Fort Collins-based and employee-owned New Belgium Brewing selling to Japan’s Kirin conglomerate.

“We’re seeing that opening and closing ratio get closer together,” Watson said. “Those are more in balance than they have been in the past.”

Colorado Brewers Guild executive director Shawnee Adelson said the rate of brewpub closures “kind of ebbs and flows each year, but many of those closures reopen as another brewery.”

While market saturation certainly contributes to brewery closures, Adelson noted that “we still see city council districts in Denver that don’t have a brewery at all.” She added, however, that the usual suspects — increased competition, property taxes, costs of ingredients and wages — do play a part.

Still, “we in Colorado call ourselves the state of craft beer,” she said. “We have the second most breweries behind California. They have 1,000 and we have 425, but they have seven times our population so, per capita, we have substantially more than they do.

“We have a legacy some of those up-and-coming states don’t have. We’re ranked No. 1 in economic impact per capita.”

“The boom started here five, 10 years ago, but as leases come due, lots of brewers are thinking about where they sit in the marketplace and whether they can continue, and what their options are,” Watson said. “People are being more judicious about opening. Some people are kicking the tires and realizing how competitive it is and how much work it is and decide not to open. Breweries that are thinking about opening a second location are taking long, hard looks at that.”

Although the number of closures is rising, he said, “it’s not a huge spike. We’re not seeing the industry collapse by any means, so I don’t want this to be a gloom-and-doom take, but as you get more breweries, you’re going to get more closings. That’s particularly true in a competitive marketplace like the one we have here in Colorado.”

What’s the recipe for survival? For Watson, an important ingredient is looking beyond craft brewing’s existing 13 percent share of the market to try to reel in the other 87 percent. He calculated last year that if 1 million new craft drinkers consume just a pint a week, that’s 200,000 incremental barrels, so 5 million would mean a million more barrels.

“There’s no specific key,” Watson said. “A lot of it is running a good business — but what does that mean? It means finding some sort of differentiation, finding your niche. With so many great local breweries here on the Front Range, why is a customer going to pick yours first or keep you in the rotation if there’s a couple that they’re buying from? What are you doing that you can really say, ‘This is our space. We’re the best at this.’

“Some of that could be style, location, service. Are you focusing on a demographic that’s maybe not the core craft demographic? Are you reaching out to people who other people aren’t marketing to or inviting them to their brewery?

“So it’s important to not just do what you do well but do something specific very, very well.”

Watson and Adelson agreed that such a strategy especially is important since Colorado expanded sales of full-strength beer to grocery and convenience stores on Jan. 1, 2019.

“We’ve been going through that transition over the last 14 months now,” Watson said, “and lots of breweries are facing the marketplace and asking how grocery affected their business. We hear different things from different players. The brewers who were able to activate grocery are maybe doing a little bit better than others, but there’s lots of challenges for that small business too.”

The results from the new law still are evolving, Watson said.

“The short-term effects might be different than the long-term effects as behaviors change over time and we see liquor stores react to this,” he said. “Generally, though, I think what we’ve seen is that the state’s selling a little more beer.” And with grocery stores, “you’ve got a big dedicated channel that sells more beer but doesn’t sell wine or spirits, so that’s been a benefit.”

Adelson noted that “lots of breweries that are closing don’t sell in grocery stores at all.”

“Grocery’s a bigger-scale channel that’s beneficial for the beer industry as a whole, but that doesn’t necessarily help smaller brewers who didn’t get into grocery placements or weren’t ready for that,” Watson said.

How to get a smaller craft brewery’s wares onto those supermarket shelves is a bit like a new author trying to woo a publisher.

They can succeed, Watson said, “if they have a track record of sales they can show to a grocery store, show why they’re going to be better than one of the products that’s already on the shelf. It means “not just saying I’m a local IPA but showing how that’s going to be an incremental value for a grocery store.”

Although “a lot of space is still going to be nationally or regionally mandated at most of the larger chains,” Watson said, “sometimes they still reserve some space for local control so local managers can make calls. Breweries who already had experience with that in other states are going to be better positioned, because they have seen how that works, they have been to those chain meetings before, and that’s something that’s a challenge to learn if you haven’t ever done it before because it’s a different system than working one-on-one with local liquor-store owners.”

Once your brew makes it onto a grocer’s shelves, Watson said, the next move is to figure out how to drive traffic from there back to your taproom. “That’s sales, marketing, really doing the work to tell your story,” he said. “When you have a customer in the beer aisle, give them a reason to pick up your brand.”

National surveys conducted by Nielsen discovered that more than half of craft-brew drinkers said they bought beer after a brewery visit. Two-thirds said they bought it at the brewery, 60 percent said they purchased it at a retail store and 54 percent made the buy at a bar or restaurant.

Industry groups such as the Brewers Association and Colorado Brewers Guild provide technical and business resources, as well as promotional efforts to try to help their members succeed. A big help, Watson said, has been the Independent Craft Brewer seal, “a certified mark that shows who the independent breweries are so that people in Colorado who care about that can know that they’re buying from a small independent brewer when they visit their local liquor store or grocery store.”

According to the Nielsen survey, 42 percent of craft-brew drinkers nationally said they had seen the seal, and nearly a quarter of them said they had bought a beer with the seal on the package.

Besides help from industry-advocacy groups, Watson expects more craft groups to form such as Longmont-based Oskar Blues’ CANarchy, which is bringing together small and independent craft brewers from around the country.

“They’re trying to drive some scale and cost savings around things like joint purchasing,” Watson said. “As the name CANarchy implies, they’re all brewers who package in cans, so maybe they can buy those cans together and save some money — and share some resources on the sales and distribution side as well.”

What does the future hold for the crowded craft-brewing field in Northern Colorado and the Boulder Valley?

“It’s harder to tell a singular story,” Watson said. “It’s not all gloom and doom but it’s not all great. A few years ago, all things pointed in the same direction. It’s a lot more complicated than it was.”

For new players in the market such as sci-fi brewpub Outerworld, therefore, it’s all about finding their own space.

As a science fiction-themed brewpub that was launched in late February in east Longmont, Outworld Brewing’s mission is to boldly go where no taproom in the region has gone before.

But will it live long and prosper?

“Things have gotten a lot more competitive,” said Bart Watson, chief economist for the Boulder-based Brewers Association, “particularly on the Front Range, where we have one of the highest brewery densities in the country, if not the world.”

Outworld is steering into a maelstrom of competition in the Boulder…