ESTES PARK — Nick Kane has weathered disaster before, but this one’s different.

Kane is celebrating his 50th year in business as owner of Nicky’s Steakhouse, perched along Fall River Road northwest of downtown Estes Park. In July 1982, the Lawn Lake dam failure sent a wall of water down the river that severely damaged his restaurant and adjoining motel before covering downtown in a sea of mud. But Kane and the town quickly rebuilt.

Recovery from the September 2013 deluge hasn’t been as quick.

After four years, the economic hardship has lingered, as extensive repairs to U.S. 34 through Big Thompson Canyon — which provides direct access from Fort Collins, Loveland and Greeley — enter a second winter of discontent. 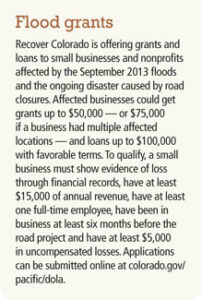 The Colorado Department of Transportation closed the highway to through traffic again on Monday, Oct. 2, to complete the construction; it won’t reopen until Memorial Day weekend in late May.

Last winter’s road closure, from Oct. 17 to May 25, triggered a 7.3 percent drop in Estes Park’s  retail sales tax revenue when compared to the same period a year before, and visitation to the national park fell by as much as 17 percent.

Town Administrator Frank Lancaster said he expected the numbers to be far worse, however, noting that from November to May, overall lodging tax revenue actually was 26.9 percent higher than in the same period in 2015-16, and that weather — including a heavy snow in May — may have had more to do with the sluggish retail numbers than the closure.

Still, small businesses such as Nicky’s felt the pinch.

“A lot of people last winter asked, ‘Why don’t they open the road on weekends?’ We couldn’t get an answer. I can see weekdays, where they have to blast and stuff,” he said. “So we have to do things to survive. The way government works, you gotta beat them to the punch or they’ll put you out of business.”

Even more severely affected were motels, restaurants and shops along Big Thompson Avenue, the stretch of U.S. 34 leading east from downtown toward the top of the canyon. The closure limited through traffic along that stretch unless visitors detoured on Mall Road, east of Lake Estes, to connect with U.S. 36 coming up from Lyons and Longmont.

“The day they closed the road, it was like hitting a brick wall,” said Penny LaBore, who with husband Brian co-owns the Estes Ark, a retailer of souvenirs and collectibles along Big Thompson Avenue. “It’s affected us greatly. We were down 50 to 75 percent, in traffic and revenue. We had to cut everything we could to survive this — including having no employees.

“So this time it’ll just be my husband and I, working normal 10-to-5 hours instead of 12-hour days,” she said.

Getting workers to their jobs was a major problem during last year’s closure. “Businesses lost staffing right off the bat when the closure was announced,” Estes Valley Partners for Commerce board president Kirby Hazelton told the Estes Park Trail-Gazette, “and it was hard to keep staff that was commuting from the 34 side.”

At a meeting in late September at Elkins Distillery to discuss the new closure’s business impacts, Brian LaBore heard suggestions for ways to draw visitors back to the east end.

“When they do events, they always have them downtown,” Penny LaBore said. “Why not do some events on this end. So many people don’t generally realize what’s out here.”

She suggested specific signage for westbound travelers coming up from Lyons on U.S. 36 that would lure traffic onto Mall Road to connect with Big Thompson Avenue businesses, and Lancaster agreed.

“We’ve been talking to CDOT about where the detour signs are, so we can give those folks a little more visibility,” he said. “Otherwise, they don’t get the drive-by business.”

Jon Nicholas, president and chief executive of the Estes Park Economic Development Corp., noted that “some of the businesses on 34 are discussing ways of cross-promoting the businesses, and trying to do different things to let people know they’re still open.

“We had a meeting with our EDC, Visit Estes Park, town officials and the local business associations,” he said, “and we’re offering to help any way we can.”

The LaBores are watching.

“Now we just have to wait and see if anything’s done about it,” Penny LaBore said.

Elaine Hunt-Downey, working the information desk at the Estes Park Visitor Center, noted that “we certainly have calls” about the road closure, “and we did last winter too. Nothing was critical; they just needed information. CDOT does a really good job getting information out, but people hear it and three months later they’re calling and asking ‘What was that again?’ ”

Lancaster pointed out that the biggest impact of the U.S. 34 closure would be for visitors from the middle of Loveland north to Fort Collins and east to Greeley. “Any farther east and it’s a wash — 36 or 34,” he said.”Using 36 doesn’t take much more time at all, really.”

The message the town wants to get out, Lancaster said, is for visitors to “Take the scenic route. Come up 36.”

A more direct impact will be felt by businesses farther east on U.S. 34, in the canyon areas that are closed to through traffic.

“From what I hear,” Kane said, “they live down the canyon, they’re like in house arrest.”

Kane’s not far off, agreed Annie Vest, co-owner of Annie’s Mountain Retreat, three miles down the canyon and off U.S. 34.

“I’m only four cabins, but this is my bread and butter,” she said. “To get in and out, my guests will have to call a pilot car” to escort them through the restricted stretch “and give them several hours’ notice,” Vest said. “If you’re on vacation, you’re not going to want to have to do that. I’ve got a honeymoon reservation for the second weekend in October, and I told him, ‘I don’t know. You might have to have a pass, or show proof you’re staying with me.’

“If we can’t get our guests down here, we’re done. We had to refinance our house to keep from going under after the 2013 flood,” she said. “This summer was great. We got back on our feet. This winter is what we needed to continue.

“I can’t lose even one month, not in the position that I am, trying to get back on my feet from the flood,” she said. “I don’t get walk-ins. I have nowhere to put a vacancy sign. My cabins are basically run out of pre-bookings. So I’m scared to death that my pre-bookings, once they start to hear that 34 is closed, I’ll start getting phone calls. I got them last year when Denver news channels said Highway 34 was closed for the season — but they were talking about Trail Ridge Road. People go, ‘Oh, my God, how are we going to get to you?’ Unless they word it right, people start panicking.

“If we get them in here but they have a bad experience because of the closures, there are so many sites like Yelp! Or TripAdvisor that they can put in their reviews — and if they’re bad, this could hurt me for future years. I’m trying to hang onto my business.

“All we want is for someone to tell us how we can get our guests down there, and if there’s going to be a time we absolutely can’t have people down there.”

Farther down the canyon, the Colorado Cherry Company will close its original store just above the Narrows and open outlets at the Stanley Hotel in Estes Park and on Nov. 1 at a location in the Centerra shopping area in Loveland. Last year’s closure began west of the Narrows store, but company officials said potential customers didn’t know it and thought the store was inaccessible. A detour brought more traffic past the company’s location in Pinewood Springs, along U.S. 36 between Lyons and Estes Park, but the gain in business there couldn’t replace the lost sales from the U.S. 34 location.

State and local officials say they are aware of the impacts.

Nicholas urged small businesses to apply now for the Colorado Office of Economic Development and International Trade’s “Recover Colorado” flood-relief grants, which are still available and specifically designed to help those hurt by the highway closure.

CDOT spokesman Jared Fiel said he hoped this year’s staged closures could ease the impact for canyon residents, and noted that the entire canyon would be accessible on Thanksgiving and between Dec. 23 and Jan. 2, with pilot-car escorts and no permits necessary.

“We’re trying to do this in a way that we can open it up at least for residents as we get the work completed,” Fiel said. “We actually are working with them to come up with something that makes sense.”

By closing the canyon for a second winter, he said, CDOT hopes to cut more than a year off the expected permanent reconstruction of U.S. 34 and have minimal impact on summer tourist traffic.

Despite all the worries, most Estes-area business people contacted said they had confidence the issues would get sorted out. And if heavily impacted businesses such as Annie’s can survive the closure, they know it will be worth it.

“They’re doing a wonderful project; we’re not throwing the baby out with the bathwater,” Vest said. “We’re not mad or angry. We know they need to do the work. We just need them to communicate with us who have businesses along there.”

Added the adversity-tested Kane, “We’ve been fortunate. Colorado’s been great to us.”

ESTES PARK — Nick Kane has weathered disaster before, but this one’s different.

Kane is celebrating his 50th year in business as owner of Nicky’s Steakhouse, perched along Fall River Road northwest of downtown Estes Park. In July 1982, the Lawn Lake dam failure sent a wall of water down the river that severely damaged his restaurant and adjoining motel before covering downtown in a sea of mud. But Kane and the town quickly rebuilt.

Recovery from the September 2013 deluge hasn’t been as quick.