The legal, regulated U.S. cannabis market sold $10 billion of products in 2018, will end 2019 at about $13.6 billion in sales and expects to grow at a 14 percent annually compounded rate for the next six years.

And those estimates don’t take into account the addition of other states (18 are currently debating it) to the legal cannabis marketplace, nor does it account for potential changes in federal regulation that could happen after the 2020 national elections.

Without question, the report concludes, cannabis sales and usage is rapidly changing and growing, and it’s not just happening in Colorado or the United States. Fifty countries worldwide have legalized marijuana usage in some form — for recreational use, medical use or some variation — and six countries including Canada in North America have legalized pot in all forms. 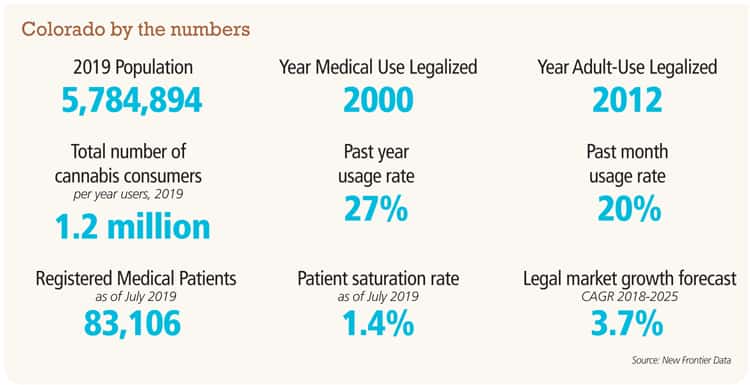 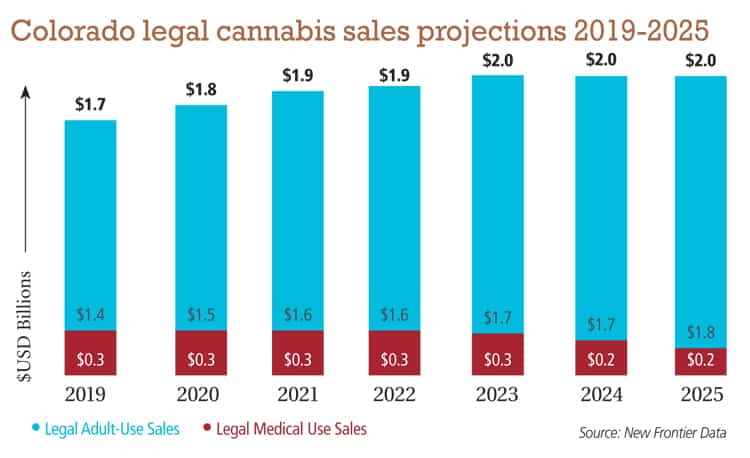 Growth is driven, the report said, by increased acceptance of marijuana use as well as legalization. Also, a greater diversification in product lines using concentrates and edibles has increased interest and acceptance.

As legal usage rises, illegal usage declines, although it’s not one to one. In 2018, U.S. illegal pot sales totaled about $64 billion. Declining usage of illegal marijuana gives investors in the new legal cannabis industry an anticipated significant upside as users convert to legal sources, the report said.

Colorado, the first among the states to legalize recreational marijuana use in 2016, has 1.2 million cannabis consumers this year and expected sales by year end of $1.7 billion. The report suggested that the sales number will rise to $2 billion by 2025. That will place Colorado third among the states with legal marijuana sales, behind California with $3.2 billion in projected sales and Washington state with $2.6 billion in sales.

Most of Colorado’s pot users consume recreational products. The state legalized medical marijuana in 2000. It took only two years from the 2014 legalization of recreational weed for recreational users to eclipse medical users, the report said.

“Customers are getting more sophisticated,” said Jim Marty, a CPA and founder of Bridge West CPAs LLC, a Longmont public accounting firm that works exclusively with the cannabis industry. Marty said customers increasingly are willing to pay for specific, high-quality strains of marijuana.

Marijuana flower is still the dominant form of the drug consumed, although there’s a rapidly growing shift to non-combustible alternatives such as concentrates and edibles. Gummy bears are the most popular form of edibles.

For businesses involved in the production and sale of pot products, movement to value-added products such as edibles helps support premium pricing, the report said, because competition has begun to draw down the retail price of more-traditional variations such as flower.

Investments in the cannabis industry are exploding, despite the federal prohibition on use of the drug. Two factors are driving the investments. First, companies outside the industry are seeing opportunity, or looking to shore up their historical sources of income that are threatened by the growing use of recreational pot. Beer maker Anheuser-Busch InBev SA/NV, for example, entered a joint venture with Canadian cannabis company Tilray Inc. (TLRY.O), to explore creating beverages with cannabis ingredients in the Canadian market. The deal also may be as much about acquiring expertise as it is about a new product line, the report said. Others such as The Scotts Miracle-Gro Co. see opportunity among growers.

Second, the legalization of marijuana nationwide in Canada has opened doors to capital markets in that country that don’t exist in the United States, which has resulted in Colorado and U.S. companies launching publicly traded Canadian operations.

“They’re [buyers of companies] are looking for companies with good, clean books and records, and they’re looking for profitability after taxes,” he said. Profit after taxes is important because of how the Internal Revenue Service treats cannabis companies.

New Frontier Data reported that in the first eight months of 2019, there were 400 capital raises totalling $10 billion and 243 mergers and acquisitions in the cannabis sector.

The legal, regulated U.S. cannabis market sold $10 billion of products in 2018, will end 2019 at about $13.6 billion in sales and expects to grow at a 14 percent annually compounded rate for the next six years.

And those estimates don’t take into account the addition of other states (18 are currently debating it) to the legal cannabis marketplace, nor does it account for potential changes in federal regulation that could happen after the 2020 national elections.

Estimates of industry growth have been compiled in a massive research study completed by New Frontier Data,…