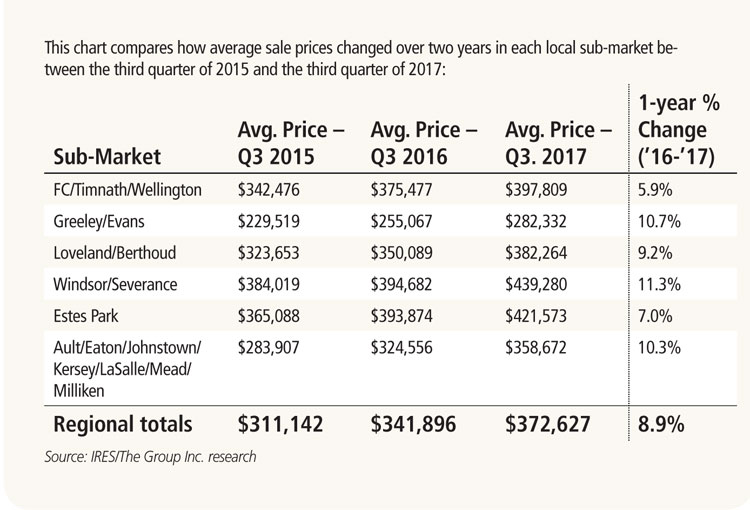 In that case, you may want to buckle your seat belts in Northern Colorado.

According to the Colorado Department of Labor, Colorado added roughly 43,000 jobs between July 2016 and July 2017. And nearly half of that total – 21,377 jobs – happened in Larimer and Weld counties. That means two counties that account for 11 percent of the state’s population generated almost 50 percent of Colorado’s new jobs over the past year.

With that in mind, many of the factors at work in the current Northern Colorado housing market – including rising prices and competition among buyers for available homes – won’t be altered in in 2018. Look for prices to climb by 5 percent to 7 percent, and possibly even more with the price of construction materials likely to rise in the wake of this summer’s hurricane damages.

On a related note, if prices increase only slightly more than 7 percent over the next 12 months, we could be looking at average sales prices across Northern Colorado reaching $400,000. More on that below.

Housing supply continues to influence price growth. When availability is tight, the buyers are forced to compete on price. As of the end of September, inventory in Northern Colorado amounted to just 1.56 months of supply, based on the current pace of home sales. That’s well below the standard measure of a balanced housing market, which calls for six months of supply.

Let’s take a closer look at how the regional market performed during the third quarter (July-September) of 2017:

Among the six sub-markets in Northern Colorado, prices picked up the most on the east side of Interstate 25. Greeley-Evans (10.7 percent), Windsor-Severance (11.3 percent), and the outlying Weld County towns (10.5 percent), all experienced double-digit growth during the quarter. By comparison, Fort Collins-Wellington-Timnath (5.9 percent), Loveland-Berthoud (9.2 percent), and Estes Park (7 percent), all came in below the 10 percent threshold.

As a function of the continuing low supply, regional sales were essentially flat in the third quarter – up less than 1 percent – despite strong demand. Buyers closed on 3,009 homes during the quarter, compared to 2,992 last year.

Among the sub-markets, the most growth in transactions occurred in the combined Weld County towns of Ault, Eaton, Johnstown, Kersey, LaSalle, Mead and Milliken, which registered 335 sales – up 12 percent.

Larry Kendall is co-founder of The Group Inc. Real Estate and is creator of Ninja Selling. Reach him at 970-229-0700 or via www.thegroupinc.com.

In that case, you may want to buckle your seat belts in Northern Colorado.

According to the Colorado Department of Labor, Colorado added roughly 43,000 jobs between July 2016 and July 2017. And nearly half of that…

Wells: 3 reasons why home prices are not in danger

Tayer: If you love Boulder’s libraries, let’s keep them