GREELEY — Site selectors representing law, accounting and real estate firms that search out best places for client companies to locate say Northern Colorado has a story to tell, has attributes that major U.S. and international companies desire and would blow away the competition if the region comes to grips with training young people in vocational trades.

The Northern Colorado Economic Alliance, which is rebranding as OneNoCo,

hosted five site selectors this week. Starting Wednesday night, they introduced them to major business, educational and governmental players, toured them throughout Northern Colorado and ended Friday in Greeley with a luncheon at which the selectors talked about their observations and gave suggestions for driving economic and job development in the region.

Virtually all their clients want assurances that the right people with the right skills exist in a region where they’ll locate operations, they said. And lack of vocational skills has become the major impediment for many of their clients.

Benton Blaine, a site selector for Ernst & Young LLP, said he has a client looking for a place to locate a plant and employ “a couple thousand employees.” But he hasn’t been able to find anyplace “because the hubs that have absorbed so much of the industrial development in the country are tapped out.”

“There’s a significant lack of vocational training all over the country,” he said. He encouraged regional economic developers to “T-up the next generation with vocational training.” He also described a vocational training facility in his home state of North Carolina that is able to produce high-demand graduates who receive written job offers six months before graduation.

“Companies will find it (vocational skill) if you’ve got it,” he said.

The five site selectors said companies first need to know that they’ll have workers before they’ll even consider availability of sites or incentives from local or state governments.

They said that Northern Colorado’s history works in its favor in getting the attention of companies looking to expand or relocate.

Gary Yates, vice president with Chicago-based commercial real estate firm JLL, said in the short visit to Northern Colorado he met numerous people who previously worked at Hewlett-Packard or Kodak, companies that downsized 20 or more years ago. “They all came out of those companies as entrepreneurs,” he said. The region has done a good job of supporting those entrepreneurs so that they could stay here and create new companies. Companies looking to expand like entrepreneurs and people who are innovative, he said.

Angela Grace, a lawyer from Alabama who specializes in working with European companies, said “every company is looking to get closer to innovation. You can’t underestimate the importance of innovation,” she said.

She described other countries that compete economically with the U.S. as less innovative than the U.S. “They are optimizers, not innovators. We’re the innovators.”

Kevin Major, a senior director with real estate company CBRE, said the region has a low unemployment rate but is experiencing underemployment of its workforce, which is a positive for companies coming in. Companies needing engineers will like that there are seasoned engineers here who have settled down with their families. “Companies want security (of their workforces) and if they know that the market has stickiness with the engineers they hire, they’ll like that.”

The group said that the region needs to determine where it wants to focus and then tell the story. Some areas of the country, for example, have spent millions to create brands that have attracted numerous companies.

Grace said aerospace is “a no brainer” if the region is looking for an area of concentration. She also said the region could provide leadership in alternative energy development. Sports and leisure activities would be a third area of emphasis for Northern Colorado, she said.

“The lowest hanging fruit you have are the companies already here; ask them how you can help them grow,” she said.

Christopher Lloyd, senior vice president of the law firm McGuireWoods based in Richmond, Va., said the region needs to define what it wants to be. “What are you going to be good at, so you don’t become everytown U.S.A.”

The site selectors provided advice about incentives. Large companies, said Blaine, often target a return of 10 to 20 percent of their capital expenditure in incentives. But Grace said if a company is saying the incentives are the most important, “be careful. They’re using you.” Incentives should be used to close the financial gap in a company’s  expansion plans.

Blaine said companies “would rather have a solution (to their issues), not cash.”

Yates said that “states that offer the biggest incentives do so because they have a tax to overcome.”

In response to a question about transportation, all said that improving infrastructure is critical to growing companies. Regional strengths are lost if connecting highways have stop lights every few feet, they said.

GREELEY — Site selectors representing law, accounting and real estate firms that search out best places for client companies to locate say Northern Colorado has a story to tell, has attributes that major U.S. and international companies desire and would blow away the competition if the region comes to grips with training young people in vocational trades.

The Northern Colorado Economic Alliance, which is rebranding as OneNoCo, 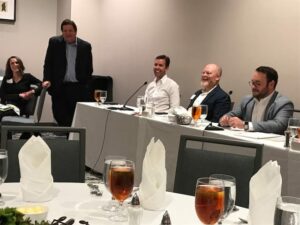 Andy Montgomery, chief executive officer of the regional economic development organization OneNoCo, closes the discussion at a meeting with…