New and planned hospitals and stand-alone emergency rooms along the northern Front Range are coming mainly as a result of the federal Affordable Care Act, the head of the Colorado Hospital Association said.

All the new construction is not as frenetic as it may seem from the outside, however, Summer said. Health-care industry leaders have been studying the changing landscape for years.

“Nobody has built any kind of capacity without a need for understanding their product,” Summer said.  “We’re repositioning the health-care system. We want to provide service on an inventory basis.”

“Colorado and other states are recognizing a system that provides health care that responds to the enormous changes of people who are covered … people who now have health insurance who didn’t have it before,” Summer said.

In the Northern Colorado market, patients are bound to be the biggest winners in the battle between Banner Health, University of Colorado Health and other health-care industry providers to dominate the market.

The new hospital at Harmony Road and Lady Moon Drive in Fort Collins was built in part to serve 28,000 Kaiser Permanente patients in Northern Colorado who are now part of Banner’s network, said Paul Matthews, a Banner spokesman. Provider agreements with Aetna Inc. and Humana Inc. also have focused the battleground, Matthews said.

“That’s the direction that health care is going — is networking,” Matthews said.

Banner Medical Center was built to be expanded rapidly to 80 beds and ultimately to 144 beds, depending on patient needs, Matthews said. But because federal Affordable Care Act rules focus on keeping patients out of the hospital as much as possible, Banner officials decided to start with a small footprint, he said.

“It doesn’t make sense to open a huge hospital right off the bat,” Matthews said.

University of Colorado Health plans to open its own $12.3 million emergency center on its East Harmony Road campus, just east of Snow Mesa Drive in Fort Collins. The 17,000-square-foot, UCHealth ER facility is to include an emergency room, 12 private exam rooms and a 24-hour pharmacy.

Construction is slated to wrap up in 2016 on the new, 150,000-square-foot addition, which will replace the hospital’s older “A” wing.

“Northern Colorado has one of the quicker areas of growth in the country, so we need to be able to offer care,” Swanson said. “We want to be prepared.”

Not to be outdone, Colorado State University is muscling in on the scene, with plans for a four-story, $59 million, on-campus medical center in Fort Collins. The research space is expected to include cognitive testing for seniors when it opens, among other things, said Yvonne Myers, a spokeswoman for Columbine Health Systems in Fort Collins.

Columbine has pledged a $5 million gift to the center — which will be used in part to fund the 7,000-square-foot, Columbine Health Systems Center on Aging, Myers said. UCHealth will contribute another $5 million.

In Longmont, UCHealth plans to build another 50-to-75-bed hospital at the northwest corner of County Line Road — just across from Weld County — and Colorado Highway 119. The 172,000-square-foot building will include room for future expansion, officials say. Construction is planned in the $100 million to $125 million range.

Not everyone is convinced of the need for all the medical construction. Officials at Longmont United Hospital were quoted in the Longmont Times-Call in June, saying that UCHealth’s plans for a new hospital in the city could lead to too many beds.

“If you look at the four hospitals in Boulder County,” they all are at 50 percent capacity,” Peter Powers, vice president for strategic planning and clinic operations at Longmont United, told the publication.

Centura Health is nipping at the edges of the battlefield — planning to complete an affiliation agreement soon with Longmont United Hospital, said Sharon Burnette, a Centura spokeswoman, without giving specifics.

Centura also is growing its Westminster and Broomfield facilities — planning to spend $177 million to expand the St. Anthony North Medical Pavilion at 144th Avenue and Interstate 25, which recently opened.

“As the health-care market continues to be focused on aligning providers and services in Northern Colorado, we have chosen to specifically partner with organizations whose values and mission align with Centura Health to provide greater access, quality and cost to the communities in which we live,” said Jeff Brickman, president and chief executive officer of the Centura Health northern and mountain division.

Another hospital system, Broomfield-based SCL Health, in March announced an affiliation agreement between SCL and Platte Valley Medical Center in Brighton. SCL also owns Good Samaritan Medical Center in Lafayette and in late 2012 acquired almost 50 acres in Frederick in Weld County. The land located near I-25 and Colorado Highway 52 is targeted for future expansion, said Brian Newsome, an SCL spokesman.

Hospitals and emergency rooms continue to pop up elsewhere in the Boulder Valley at an accelerated pace as well.

New hospitals are planned to be built in Broomfield and Westminster in the near future. A three-story behavioral health and rehabilitation services building is planned in Boulder.

Freestanding emergency rooms have opened recently in Firestone and Broomfield.

In Broomfield, UCHealth’s partnership with Texas-based Adeptus Health (NYSE: ADPT) is driving plans to build a 52-bed hospital, according to Dan Weaver, a UCHealth spokesman. The new hospital could open next spring in the Arista business campus that sits east of Wadsworth Parkway and on the south side of U.S. Highway 36.

UCHealth in April also said it had acquired a majority stake and partnership in Adeptus Health’s 13 freestanding emergency rooms and one more under construction around the Denver metro area and in Colorado Springs. Those include one in Firestone at 5965 Firestone Blvd near the corner of Colorado and Firestone boulevards, and one in Broomfield at 875 W. 136th Ave. in Broomfield.

Such health-care partnerships are the name of the game, said Mike Slubowski, president and chief executive officer of SCL Health. The new hospital at Westminster Boulevard and 104th Avenue, near the Westminster Promenade, is scheduled to open later this year.

“We have observed that accelerated consolidation is likely to occur among large commercial insurers,” Slubowski said.

In Boulder, Boulder Community Health officials continue on their strategy to remain relevant to patients, said Rich Sheehan, a spokesman. The hospital plans to demolish four buildings it currently owns in the Riverbend Office Park to build a new, three-story building and a parking garage for its behavioral health and rehabilitation services programs, for example, Sheehan said.

The new location is planned for a spot directly east of the existing Boulder Community Health Foothills campus, Sheehan said. All current hospital services are planned to move to the Foothills campus by 2017.

Hospital officials’ “overall plan is to move our services to locations that are more conveniently located and up to date,” Sheehan said.

In addition, health-care providers continue to add clinics and health-and-wellness facilities to their arsenals throughout Northern Colorado. They’re also snapping up physician practices around the region.

For example, UCHealth recently partnered with Poudre Valley School District to offer an employee health clinic where walk-ins are welcome. The clinic at 2211 S. College Ave., is managed by Associates in Family Medicine in Fort Collins.

Kaiser Permanente has medical office buildings in Fort Collins, Loveland and Greeley, as well as a robust contract with the Estes Park Medical Center to offer care. Each center is equipped with a pharmacy, a medical laboratory and medical imaging equipment, said Jason Tacha, executive director of operations for Kaiser Permanente in Northern Colorado.

“We’re very confident with our nationally recognized quality of care and service, along with more affordable prices in accessing care,” Tacha said. “That’s our value proposition.”

Centura touts its Colorado Health Neighborhoods, with both primary-care and specialty-care providers. Centura has such health centers in Dacono, Erie, and Thornton, among others, Burnette said.

Back in and around Fort Collins, Columbine Health Systems defines health and wellness “very broadly” for the 55-plus resident, offering wellness classes and exercise plans, along with assisted-living sites, nursing homes and now a neighborhood of 34 new patio homes in Windsor, which will go up starting in August. 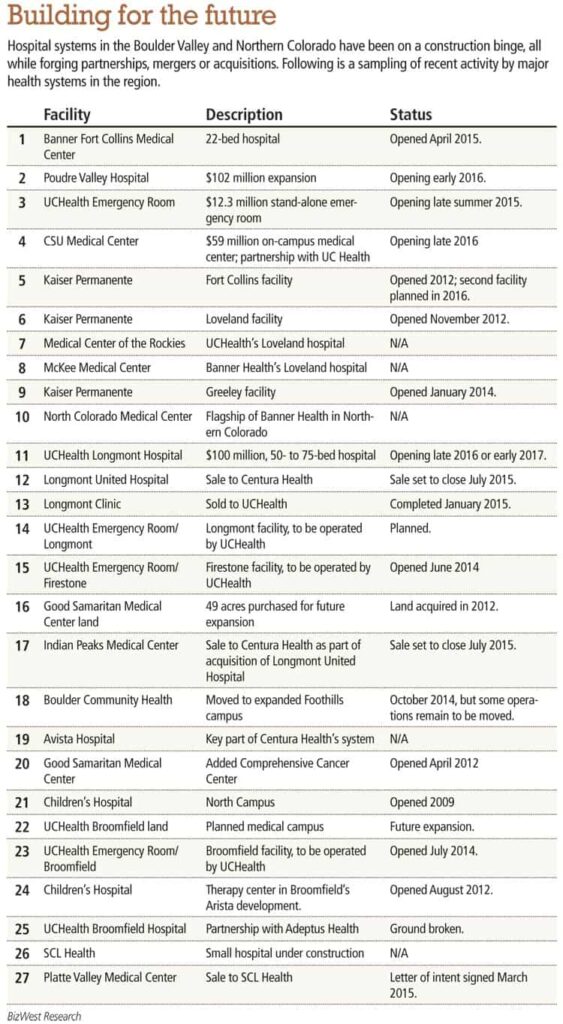 New and planned hospitals and stand-alone emergency rooms along the northern Front Range are coming mainly as a result of the federal Affordable Care Act, the head of the Colorado Hospital Association said.

All the new construction is not as frenetic as it may…