As Colorado staggered under the weight of the great recession, the state’s major research universities were dramatically boosting salaries and adding thousands of employees to payrolls.

At the same time, the schools told state lawmakers they were barely able to make ends meet because of state budget cuts.

During the decade from 2004 to 2014, top academic administrators saw their paychecks rise as much as 100 percent, while average salaries rose 24 percent for all wage earners in the state.

During that same decade, pay to all employees at Colorado’s major research universities also skyrocketed, as the institutions added thousands of employees, according to an analysis by BizWest.

In 2004, the president of the University of Colorado system made $400,000, the most of any employee of a major Colorado research university at the time. Ten years later, CU athletic director Richard George ranks as the highest-paid administrator in the state, making $700,000 in 2014.

Administrators “control the budget, and they award themselves,” said Benjamin Ginsberg, professor of political science at Johns Hopkins University in Baltimore. “Parents forced to swallow tuition increases are paying for very expensive administrators.”

Earnings of Colorado’s top academic administrators outpaced the growth in the average compensation for other university administrators statewide, which has increased by close to 24 percent during the past 10 years, according to the Colorado Department of Labor and Employment. At the same time, the bulk of the cost of an education shifted from the state of Colorado to Colorado students and their parents, who have had to rely on increasing levels of student loans and grants to fund college.

However, students have shouldered the burden of increased costs, including pay to administrators, in a state that has cut funding for public higher education, he said.

“Students can’t really afford to pay any more of that tab,” he said.

Universities defend the higher salaries as critical to recruit and retain qualified administrators to operate the large institutions in an increasingly complex regulatory environment. They also point out that their salaries are lower than similar positions at universities in other states.

The top 10 administrators in the nation make at least $850,000, for instance, with E. Gordon Gee ranking No. 1 in the nation with almost $6.1 million in pay when he served as president of Ohio State University, according to the Chronicle of Higher Education’s fiscal 2013 Executive Compensation Salary Survey. Gee, a former president of CU, now is president of West Virginia University.

As salaries increased, students picked up the tab. Full story. 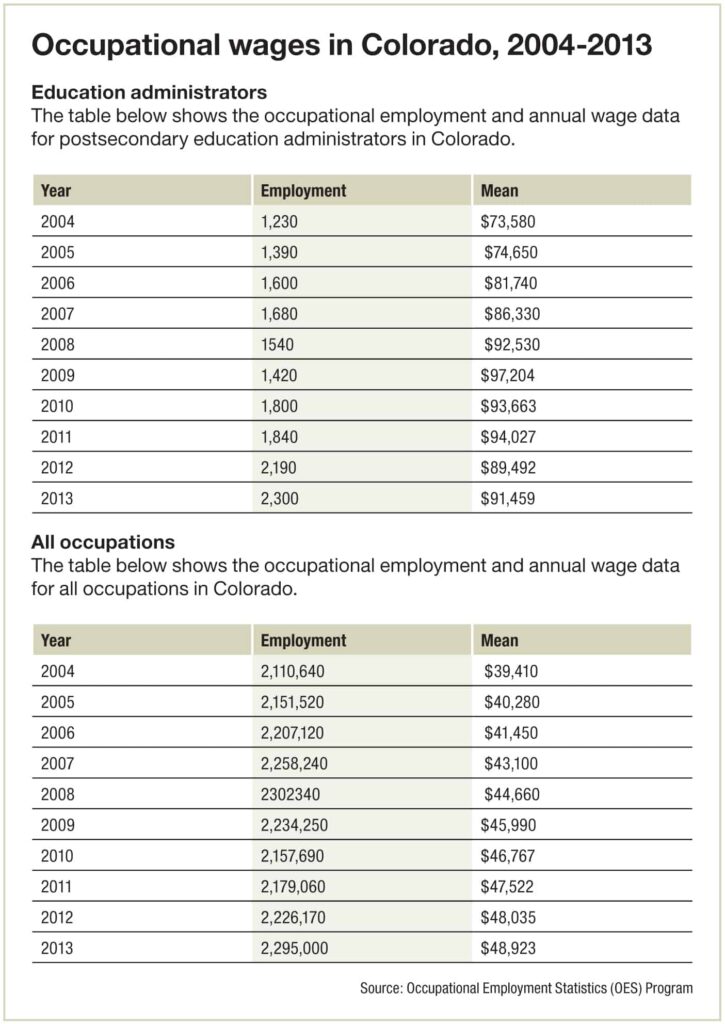 Critics call the high salaries too burdensome and the tuition hikes used to fund them excessive. Since the 2004-05 school year, Colorado’s major research universities have hiked tuition 40 times, with each school asking for and being granted annual increases.

The increased pay to Colorado’s top academics is part of a broader national trend, in which higher administrative costs account for about a third of the increased cost of higher education, Ginsberg said. Ginsberg, who chairs the Center of Advanced Governmental Studies at Johns Hopkins, is author of “The Fall of the Faculty: The Rise of the All-Administrative University and Why it Matters.”

At the same time, universities have added administrators and awarded them pay raises while cutting course offerings and full-time faculty members and replacing them with adjunct instructors, Ginsberg said.

National data show increases in salaries and the number of administrators and other non-instructional employees at a number of major research institutions over the past 10 years, according to the Washington, D.C.-based Center for College Affordability and Productivity.

Oversight of Colorado’s taxpayer-owned schools is conducted by boards either elected by voters or appointed by the governor, and those officials have consistently approved tuition hikes and the administrative salary increases. Universities gained the ability from the state Legislature to set tuition rates in 2010 amid pressure from admininstrators such as CU president Bruce Benson.

Another oversight body is the Colorado Commission on Higher Education. It doesn’t have direct authority over the colleges, but its mission is to provide access to “high-quality, affordable education for all Colorado residents.”

“We still are concerned about what things cost,” said Dick Kaufman, chairman of the state education commission. “Personnel costs are 80 percent of the budgets at the schools, and I don’t think that’s going to change much in the future.”

Kyle Hybl, chairman of the CU Board of Regents, said operations at CU, the state’s third-largest employer, have increased in complexity in the past decade. Larger budgets over the years as well as higher enrollment numbers during the recession have required additional administration, leading to higher costs.

Salary increases for CU employees also have outpaced pay of the average workforce because of the amount of education required for a CU employee vs. the average Colorado worker, he said. A portion of the higher pay goes to salaries for medical professionals at the Anschutz Medical Campus in Aurora.

“We have a talented group of individuals and leadership at the University of Colorado,” Hybl said. “Their pay is competitive, and we’re lucky to have each of them.”

Hybl also pointed out that CU generates an enormous economic impact in the state largely because of the salaries. The CU system pumped $5.3 billion into Colorado’s economy in 2011, according to the university’s most recent economic impact study.

CU regent Sue Sharkey, R-Windsor, who has advocated greater transparency in university administrative pay, also defended the higher pay. She noted that CU represents the state’s flagship higher-learning institution, with the most employees as well as medical and law schools.

“The increase in salaries, I think, in the last several years under President Benson, for the most part have really been contained,” she said.

Sharkey said she believes Colorado’s top academic administrators still may be underpaid compared with their national peers. She said the regents will have to revisit the salaries in the future to see whether they should approve even higher pay.

“Boards are co-opted often by their ‘friend,’ the president,” Vedder said. “To keep him or her happy and get invited to fancy dinners with famous campus visitors, et cetera, they err in the direction of being generous.

“After all, it isn’t their own money they are spending. No incentives exist to be frugal.” 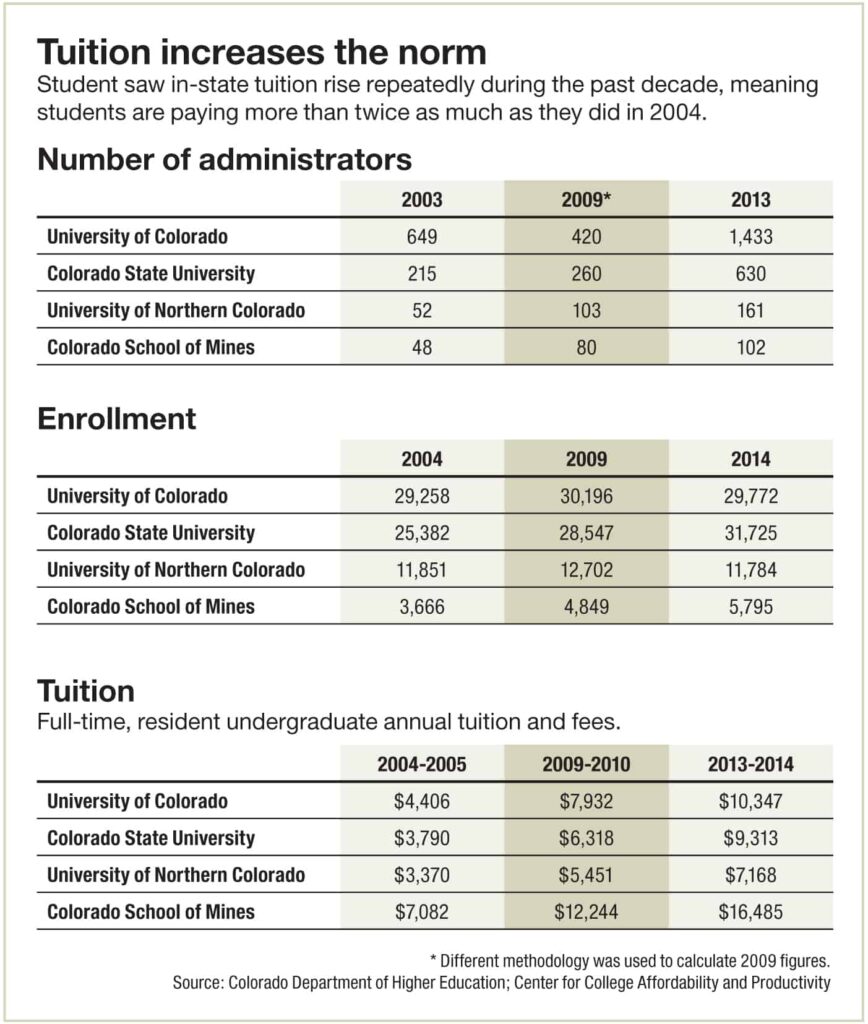 “We’re rewarding them appropriately because they are good people,” he said. “It’s consistent with what I’ve seen nationally.

The CSU system has grown in the past 10 years and the university also maintains a presence in every Colorado county through its extension services, he said.

Administrative costs at CSU likely will continue to increase, including the pay of athletic director when the university replaces Jack Graham, the fifth-highest-paid CSU administrator, who earned $260,000 annually. Frank fired Graham in August.

At Colorado School of Mines in Golden, compensation to the top 10 administrators rose to $2.2 million from $1.4 million, an increase of 57 percent in the past 10 years. Employee salaries rose to $70 million from $32.6 million, a 116 percent gain.

Enrollment grew to 5,600 students this year from 3,600 10 years ago, leading to proportionate growth in full-time employees, Mines Chief of Staff Peter Han said. The university also has had to pay salaries that match those offered by private industry in more lucrative science, technology, engineering and mathematics fields.

“With enrollment growing and research growing, we’ve had to make significant increases in staff, faculty, facilities,” he said. “That’s probably one of the bigger drivers of the big increase in total salaries over that period of time.”

Beyond base pay, top administrators such as Norton earn even more in benefits such as housing and retirement contributions.

As Colorado staggered under the weight of the great recession, the state’s major research universities were dramatically boosting salaries and adding thousands of employees to payrolls.

At the same time, the schools told state lawmakers they were barely able to make ends meet because of state budget cuts.

During the decade from 2004 to 2014, top academic administrators saw their paychecks rise as much as 100 percent, while average salaries rose 24 percent for…