A spokesman for Great Western Bank did not respond to a request for comment. The voice mailbox for Ryan Sadowy, director of development for CA Ventures, was full and could not accept messages. Sadowy did not respond to an email or to a voicemail left in CA’s main mailbox.

The two-acre site at Willow and Pine streets formerly housed Schrader Oil Co., which operated a truck yard at the location. Schrader sold the property to CA Ventures in March 2019 for $3.5 million.

The Willow Street project would include two buildings, offering studio, one- and two-bedroom apartments. The site is across from the Bas Bleu Theatre in Fort Collins’ River District.

Documents filed with the city of Fort Collins early in the project’s history describe it as contributing to the “renaissance” of the River District.

“The exciting renaissance of the River District will be pleasantly encouraged by this proposed development on a blighted site,” the document states. “Following the revitalization of a very eclectic neighborhood with industrial and agricultural roots living in tandem with the trains that also shape the site, this new development encourages the visual articulation of buildings as defined by the community vision for an active and energetic downtown of which the River District is an important part of.”

But work has been halted on the project for months as contractors went unpaid. Liens filed include:

Doug Dohn, CEO of Dohn Construction, told BizWest that some of the other liens are encompassed in his $2.2 million lien.

Dohn said that CA Ventures lost financing for the project, a situation made more difficult due to the COVID-19 pandemic.

Dohn noted that he’s worked with CA Ventures before, on the 120-unit Uncommon project at 302 S. College Ave.

“We had a great experience,” he said.

He said he hopes to resume work on the Willow Street project once CA Ventures arranges for new financing, perhaps including new equity partners.

“Absolutely. That’s our desire,” he said. “They were here, all the bigshots were here just a week or so ago.”

Bill Warren, president of National Inspection Services, whose two liens total $124,877, said his company completed environmental mitigation on the project in late March, even though the company wasn’t being paid.

“We got a little, but they still owe us quite a bit,” he said.

Warren said the site was contaminated, and National Inspection’s mitigation efforts required approval from the U.S. Environmental Protection Agency, Army Corps of Engineers, the Colorado Department of Health and the Fort Collins Department of Environmental Services.

“When we discovered that they were upside down, we were very close to being finished, and in a manner of respect to Doug, we didn’t want to delay what they were doing,” Warren said. “We just finished it up. We were so close. Arguably, this was the most contaminated site in the city of Fort Collins. So we wanted to deliver a good result to the city, too, as they’ve been on top of this the whole time. We were under an agreement with the EPA to do this as well.”

Warren said his company completed the mitigation 90 days ahead of schedule and at 50% of the proposed budget.

“We feel good about what we produced in terms of a deliverable, clean project,” he said. “But we would like to get paid.”

Warren said how the mechanics liens might be affected by Great Western’s foreclosure action is unclear.

“It depends on what happens next,” he said. “One of the things that may happen next is that somebody might take Great Western out of it, who wants to take over the project. Great Western may sell the note, subject to the liens, and in which case, we would be made whole by somebody else. We have the option and the financial ability to be part of the project if in fact we end up owning it, with Dohn and other parties. That might be a solution, for all of us to just take it over. It’s a very nice project.”

The Fort Collins Downtown Development Authority has approved $355,935 in tax-increment financing for the project, but Matt Robenalt, executive director of the DDA, said no funds have been disbursed.

“We don’t ever release any funds until the project is finished and has a certificate of occupancy,” Robenalt said.

“My understanding is that they paused in mid- to late March,” he said. “That was the last I heard about it.” 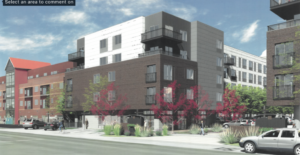 CSU engines lab: ‘We are the transition into practicality’