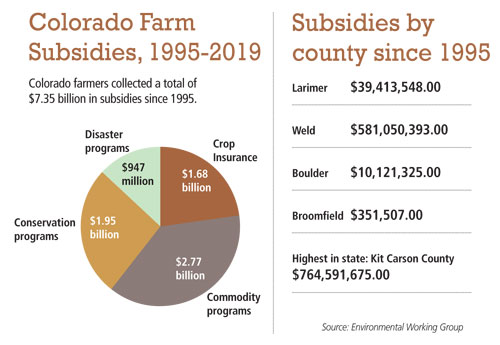 Questions have been raised over many years about who receives farm subsidies and why. Some claim that most of the money from subsidies ends up lining the pockets of large conglomerates that don’t need the money instead of supporting small, struggling farm operations that don’t have deep resources. The industry itself believes the system works exactly as designed.

According to the U.S. Department of Agriculture, 77 percent of farms in Colorado did not collect subsidy payments.

John Newton, chief economist for The American Farm Bureau Federation in Washington, D.C., said that “the first thing to clarify is that outside of the trade assistance farmers received this year, they don’t receive any direct subsidies. That’s a common misconception. What farmers get is crop insurance and they also have more target-based support.”

What that means is that if the price of commodities falls below a certain level, it triggers a deficiency payment that is dependent on price.

“Something has to trigger financial support from the government. Over the past few years, with commodity prices remaining low, those have been triggered quite often,” Newton said.

Subsidies are available for most major field crops, including corn, soybeans, wheat, rice and peanuts. There aren’t any similar programs for pork, poultry or cattle. The dairy industry does have a safety net program.

Why don’t producers who work in livestock reap the benefit of similar financial help programs? Newton said he believes it is because those systems are usually closed loop systems. The producer leases space from farmers, including barns, and the farmers give them the feed. “[Ranchers] don’t have the same risk exposures as farmers planting a crop and dealing with mother nature. The cattle industry, they have been long opposed to any kind of federal intervention,” he said.

Bankruptcies did accelerate by 20 percent from 2018 to 2019 but that was “10 times below where we were in the 1980s when we had the last major farm financial crisis. While it went up, it is still below the record highs in the 1980s,” Newton said.

Many of the nation’s medium-size farms have disappeared since 1950. They either get bigger or they get consolidated into larger operations, “what economists call the hollowing out of the middle,” he said. What that means is that there are still small family farms and large agribusinesses but very few operations in the middle range.

Many smaller operations don’t need farm assistance, he said, mainly because they are in a different financial position, equity wise, and can continue despite low commodity prices. Many small farms have already paid off their buildings, land and equipment so they are able to “withstand low prices a little bit longer than someone with higher debt or cost structure,” he said.

That said, smaller farms that have at least 10 acres can qualify for subsidies. The average farm in the U.S. is 444 acres. Smaller farms raising fruits and vegetables on three acres are unlikely to receive that type of financial support but may be eligible for other farm assistance, such as technical or conservation programs, he said.

The coronavirus will have a negative impact on agriculture because people are not able to get out and spend money or buy food from restaurants. He pointed out that about half of all food consumed in the United States is consumed in restaurants. Many states have closed restaurants to slow the spread of the virus. Add to that the trade war with China and it has not been the best year for farmers, he said.

The ag business depends on that. “As that slows down and the export market slows down, it will have a ripple effect. Ag is on shaky ground because of the trade war. It is another shaky year for farmers,” Newton said.

Even though trade agreements have been signed, no one is buying anything. China has been shut down for 30 days so there is no product moving.

Don Carr, senior adviser for EWG Midwest, said that his organization, the Environmental Working Group, started collecting data from the U.S. Department of Agriculture to get a better understanding of how subsidies and the industry’s conservation programs really work. He believes that taxpayers are funding farm consolidation through subsidies. The bigger the farm operation, the bigger the check, he said, and those large corporate farmers capitalize on those funds by buying out their neighbors when they go out of business.

Many family-owned farms are “massive,” he said. They are big business. The problem with the subsidy program, as he sees it, is that each person gets a subsidy payment to maximize the subsidies in these operations. Family members could include immediate family, cousins, nephews, brothers and sisters.

“From an environmental perspective, crop insurance and subsidies encourage people to plant as much as possible, to generate as much yield as possible, which works at cross purposes with conservation,” Carr said. These big farming operations use chemicals to increase yields.

“We have a subsidy program that works against good environmental outcomes,” he added.

Colorado is cattle country, he said. If the children of farmers want to come back and work the land, but grain prices are low, many take advantage of the asset they do have, land. That is why many Colorado farm operations have expanded to include hog barns and chicken coops. They add in a revenue stream with an asset they already have, he said.

And even though livestock farmers don’t receive direct subsidies, they are subsidized indirectly, Carr said. They receive disaster payments and the corn and other grains that get fed to the livestock are highly subsidized by the government. Cattle ranchers also can graze their cattle on federal land for cheap, which “is another indirect subsidy,” he said.

In a recent blog post, EWG took a closer look at President Trump’s 2018 bailout program to offset losses farmers were experiencing from the trade war with China. “Funded through the Commodity Credit Corp., a government entity that can borrow up to $30 billion from the treasury, the bailout has circumvented Congressional oversight,” according to the blog.

So far, the USDA has paid out $14.5 billion. Through Freedom of Information Act requests to the USDA, EWG got to look at these payments.

“We found that rather than supporting small, struggling farmers, MFP [Market Facilitation Program] money has overwhelmingly gone to farmers who are already wealthy, as well as to people who live in cities and other places far from the fields,” according to EWG. Many recipients received more than the maximum payment limit for these funds because “many farms are set up as partnerships, and each partner can apply for the maximum aid available.”

All recipients are supposed to be actively engaged in farming, but the requirement can be met through a phone call that discusses what the farm should plant.

According to an audit by the U.S. Government Accountability Office, conducted from July 2017 through May 2018, of programs that require active engagement in farming, the USDA distributed about $2.7 billion in payments to 95,417 entities, such as corporations, general partnerships, joint ventures and limited liability companies. It also distributed an average of $884,495 in payments to the 50 farming operations receiving the highest payments for 2015. Those payments were “predominantly based on members’ claimed contributions of combined management and labor (74.6 percent) and management (23.1 percent), while labor was 2.3 percent.”

Questions have been raised over many years about who receives farm subsidies and why. Some claim that most of the money from subsidies ends up lining the pockets of large conglomerates that don’t need the money instead of supporting small, struggling farm operations that don’t have deep resources. The industry itself believes the system works exactly as designed.

Colorado farmers received $7.35 billion in subsidies from 1995 to 2019, according to information compiled by the Environmental Working Group; $2.77 billion of that went to commodity programs; $1.95 billion…

Farm bankers need to keep up with ag tech