BERTHOUD — Colorado — specifically, Berthoud — is now home to one of 34 Tournament Players Club (TPC)  golf courses in the U.S.  Members of the semi-private club are currently playing on the par-72 TPC Colorado course, and the general public will join them later this summer.

In the works for a decade-plus, the TPC Colorado course spreads out over more than 100 acres and sits on U.S. Highway 287 along the edge of Lonetree Reservoir.  The single 18-hole loop course is designed to delight and challenge both beginner and professional golfers with its unique Scottish links-style course.

It will also boost the local economy.

Chris Kirk, administrator for the town of Berthoud, described his current role in the project as helping the developers get through the build-out process while they prepare for national tournaments and complete licensing.

TPC Colorado, which like all TPCs is licensed by the Professional Golfers Association (PGA), will host professional tournaments and appeal to a national market, increasing the number of people it brings to the area in a number of ways.

For one, a Web.com Tour is already booked for the championship course each summer from 2019 through 2023.

Web.com Tours are developmental tours for the PGA Tour and bring in professional golfers who haven’t yet reached the PGA Tour level or haven’t won enough points to stay at it.

“With each Web.com Tour, they’re getting about 20,000 people who come to view, and for the first one here, we may have more than that,” said Walt Elish, business development manager with the town of Berthoud.

Groups like chambers of commerce will take advantage of the fescue-lined fairways and stacked-sod-wall pot bunkers to host regional golfing events as well, according to Kirk.

Known for their unique courses and conditioning, TPCs provide recreational golfers with the opportunity to bump up their skills on the same kinds of terrains that the world’s best golfers compete on.

The charter group includes about 100 children who are 17 and under.  More than half of the total membership have never been members of a private club.

“It’s a little more family-based than we originally thought,” Collins said, adding that the club will focus on junior golf as well as on development for other skill levels.  “It means we get to create this tremendous culture.”

What he loves about the TPC Colorado course is the layout, which includes unique characteristics of a Scottish links-style course.

For example, there are only trees on one hole.  “That means you’re overlooking 1,200 acres of water and, even with the housing development, on the majority of hills, you’ll see both water and the mountains,” he said.  “There are also 18 memorable holes so I can play every hole in my mind because none of them is alike.”

TPC Colorado is built with a single loop, unlike the two nine-hole loops on most golf courses.  “With this none-returning nine, you play out for a couple of miles and then come back in,” Collins added.

Club memberships kick off at $25,000 with monthly dues starting at $325.  In addition to being able to play on the TPA Colorado course, privileges include access to the clubhouse still under construction, water activities and fine dining as well as to the TPC Network worldwide.

Daily greens fees for public tee times will start at $175.

And for those people who don’t want to leave once they’ve seen the golf course, Heron Lakes at TPC Colorado is under construction — building residential properties as part of the community.  Homes will range from multi-million-dollar estates to condos and townhomes.  The 800-acre development includes Lonetree, McNeil and Welch reservoirs.

As a bonus, those who purchase a home in Heron Lakes will receive a membership discount of  $12,500 to join the golf club.

Aside from the fact that Berthoud offers a lot of open land with mountain views and cool water  reservoirs, the town bumped up its appeal to housing development in 2013 by changing some of its rates.

“We changed our water policy pricing,” said Elish.  In general, water rates that were previously priced at $23,000 for single family equivalents were lowered to $12,500.

“There are six residential developments in Berthoud now and some are due to that.”

BERTHOUD — Colorado — specifically, Berthoud — is now home to one of 34 Tournament Players Club (TPC)  golf courses in the U.S.  Members of the semi-private club are currently playing on the par-72 TPC Colorado course, and the general public will join them later this summer. 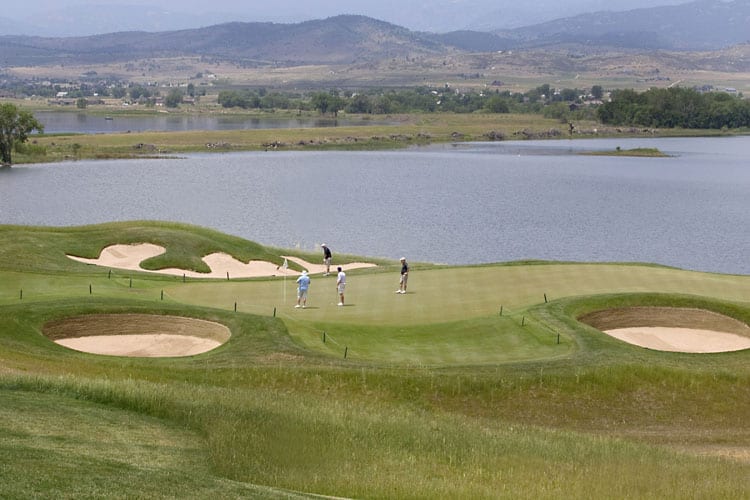 Golfers putt on the 16th green, a par-3, on the TPC Colorado, a ground-up golf course development located in Berthoud. The 800-acre golf community will encompass a master-planned residential neighborhood, an 18-hole championship golf course and clubhouse, a community…

Runners to your mark: BolderBoulder is on again