BERTHOUD — It was the early 1990s, and Steve Byers needed to figure out what to do with his life. The U.S. Air Force Academy, typically, puts its graduates on a fairly determined career track. But Byers, having majored in history, graduated in 1987 and completed his service, was qualified only to do the one thing he no longer wanted to do — fly.

He’d always been interested in the alternative-energy industry, though, and even if it was “dead” at the time, as Byers said, it was an option. Without knowing it’d change the course of his life and his career, Byers found a nonprofit in Atlanta that specialized in inspections and alternative building techniques.

He begged them for an internship, then a job, and all the while, he fell in love. Byers spun his passion into a business, EnergyLogic Corp., in 2006, again with no idea of where it would take him. Eleven years later, the Berthoud-based company is one of the fastest-growing in the region, employs 54 people and posted about $4 million in revenue in 2016.

“We’re in a rather different place now,” is how Byers modestly described EnergyLogic’s growth.

The company initially offered its services to homebuilders as a Home Efficiency Rating System evaluator, which is the construction-industry standard for energy efficiency in a home.

Byers started EnergyLogic with his wife and a business partner whom he had met in his days working for a nonprofit. They settled their company in Berthoud for several reasons, primarily because Byers’ wife is from there and they wanted to be closer to family. Byers grew up an Army brat and spent some of his childhood in Colorado Springs; he loved the state, too.

They also saw opportunity there. The population of the Colorado Front Range, 5.4 million people as of the 2010 census, is projected to grow by 87 percent by 2050. Those people will need places to live, their dwellings will need energy inspection, and they will be living in one of the most environmentally conscious states. It seemed like the perfect place in which to start EnergyLogic. 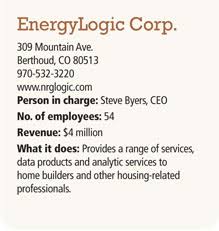 At the time, Byers knew nothing about business, and the idea of learning wasn’t particularly appealing to him. The more he did it, though — and you may be sensing a theme here — Byers came to love the minutiae of running a business. EnergyLogic soon grew beyond his expectations.

Byers thought the company was big when it hit 10 employees. Twenty, maybe, was its upper limit. Then it grew to 30, to 40, to the 54 it employs now. Byers’ new target is 100. EnergyLogic grew so quickly that his wife had to quit her job as a professor at the University of Colorado to manage the company’s books full-time.

Perhaps most striking is that the recession hit during the company’s infancy, but EnergyLogic grew through it. In Byers’ words, it “made its own luck.” It diversified beyond builder services and home inspections.

EnergyLogic started offering other industry-specific services that weren’t limited to its original mission. It trains engineers and other energy-industry professionals, offering certifications in HERS and other industry standards, both in person and online.

It developed its own data-management software, called DASH, for performing energy inspections. EnergyLogic constantly iterates upon DASH during its own inspections before it passes on updates to its clients. In 2013, 10 percent of all HERS ratings were processed using DASH. It also started offering LEED and Energy Star certifications.

“Diversification allows us to be responsive to the market, be nimble and respond to client needs,” Byers said.

That allowed EnergyLogic to grow evolutionarily and stay within itself, rather than expand rapidly. Byers doesn’t believe in “aha” moments. He treasures the process of growth as much as the result itself. That said, he is a perfectionist who runs a company full of them. EnergyLogic doesn’t adhere to HERS standards, but strives to exceed them.

“Those standards are the minimum,” Byers said. “If you want to be stellar, you have to exceed it. If your standard is above the minimum, everyone is held to that. It’s a low bar to clear.”

To that end, EnergyLogic created a companywide standard by interviewing and studying their best employees, trying to reverse-engineer the traits that made them great. Management then focus-grouped with its entire staff, picking their brains on these characteristics to distill them into a set of values.

They came up with five, matched to the first letters of the alphabet. All for one and one for all, because “the whole of our team is greater than the sum of its parts.” Build a better mousetrap, because EnergyLogic tries to “find creative solutions to the challenges we face.” Chase perfection, because “you’re either chasing perfection or you’re not.” Do the right thing, “even when it’s hard.” Energy — of course — because the company “brings it, and we save it.”

EnergyLogic’s revenues are projected to grow by about $1 million in 2017, to just shy of $5 million. Byers said the company will exceed that if things go well. Meanwhile, the formerly listless veteran will keep living his charmed life — Byers is his own boss; he works with his wife every day; he stumbled upon his greatest passions and found a way to monetize them. When he talks about it, he barely seems to believe it:

“How many times can anyone get that lucky?”

BERTHOUD — It was the early 1990s, and Steve Byers needed to figure out what to do with his life. The U.S. Air Force Academy, typically, puts its graduates on a fairly determined career track. But Byers, having majored in history, graduated in 1987 and completed his service, was qualified only to do the one thing he no longer…