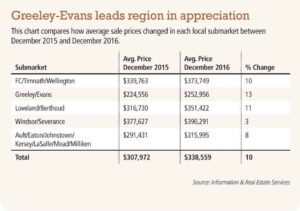 Interstate 25 can be called Northern Colorado’s “Main Street.” It also serves as a geographic dividing line of sorts, roughly down the middle of the region’s housing market. From that perspective, we can make some interesting observations.

One conclusion from comparing sales between submarkets east of I-25 (Greeley, Evans, Windsor, Severance, Eaton, Johnstown, Kersey, LaSalle, Milliken) to those west of I-25 (Fort Collins, Loveland, Wellington, Berthoud), is that you can save about $70,000 on the price of a home if you go east. Of course, there are a range of factors to consider beyond which side of Main Street you choose to buy your house; but the difference between average prices — 22.6 percent — is eye opening.

Here are some further assessments to consider about residential real estate as we look back on 2016:

• Looking for a way to make $100,000? You would have done just that if you owned a home in Northern Colorado for the last five years. In every submarket that makes up the Northern Colorado real estate market, the average sales price increased approximately $100,000 between 2011 and 2016. Here’s a sample of some of the percentage increases in sales prices over the past five years:

• Small towns in Northern Colorado continue to be a major attraction to homebuyers. For instance, the number of annual sales in Wellington is up 192 percent from 2011 to 2016. For Windsor-Severance, sales are up 106 percent in that same period. As a su-market, sales across the towns of Ault, Eaton, Johnstown, Kersey, LaSalle, Mead and Milliken are up 48 percent.

• While small-town sales are soaring, overall sales across the region — 10,240 — were essentially flat in 2016, due largely to a lack of supply, which is also a key factor for rising prices – an average increase of 10 percent regionwide. All indications are that 2017 will yield similar results for similar reasons.

• Sales numbers may have been flat, but dollar value continues to climb sharply, up to a total of $3.44 billion in dollar volume across Northern Colorado. As we discussed in the paragraph above, the number of sales — up less than 1 percent — is not the big factor in dollar volume. It’s increasing prices driven by tight supply.

• Average prices were up across all submarkets, led by Greeley-Evans, which experienced an average increase of 13 percent.  At $390,291, Windsor-Severance continued to be the most expensive submarket. However, if you were to split Berthoud off from the traditional Loveland-Berthoud submarket, it becomes the priciest town in Northern Colorado, with an average sales value of $412,226. Why? Berthoud’s proximity to Boulder, which is far and away the most expensive market on the Front Range.

Larry Kendall co-founded associate-owned The Group Inc. Real Estate in 1976 and is creator of Ninja Selling. Contact him at 970-229-0700 or via www.thegroupinc.com.

Interstate 25 can be called Northern Colorado’s “Main Street.” It also serves as a geographic dividing line of sorts, roughly down the middle of the region’s housing market. From that perspective, we can make some interesting observations.

One conclusion from comparing sales between…

IRS to auction a property in Fort Collins