Jordan Todd is racing against time — and real estate cycles.

The co-owner of Self-Storage at Centerra in Loveland is riding high since the August opening of the first phase of the project, including almost 500 units, at 5225 E. 37th St., and he’s looking to get the next phase out of the ground before competing storage projects are approved.

The fact that his project is fully entitled with the city is a plus, he said, whereas many other self-storage projects remain in development review. That gives him a leg up, as he prepares to launch the second phase of the project next spring, with potential for another 500 units.

“We’re trying to take advantage of the fact that nobody else is building right now,” he said.

Not that other projects aren’t planned. Developers are preparing to unleash thousands of additional self-storage units onto the market along the Front Range in the coming years, taking advantage of a boom in self-storage that has one analyst celebrating Colorado’s position in the industry.

Colorado now ranks as the 14th-largest self-storage market in the nation, with 1,272 facilities encompassing 65 million square feet, according to the Self Storage Almanac. Thousands of new units have been proposed at municipal planning departments, from Fort Collins all the way south along the Front Range. 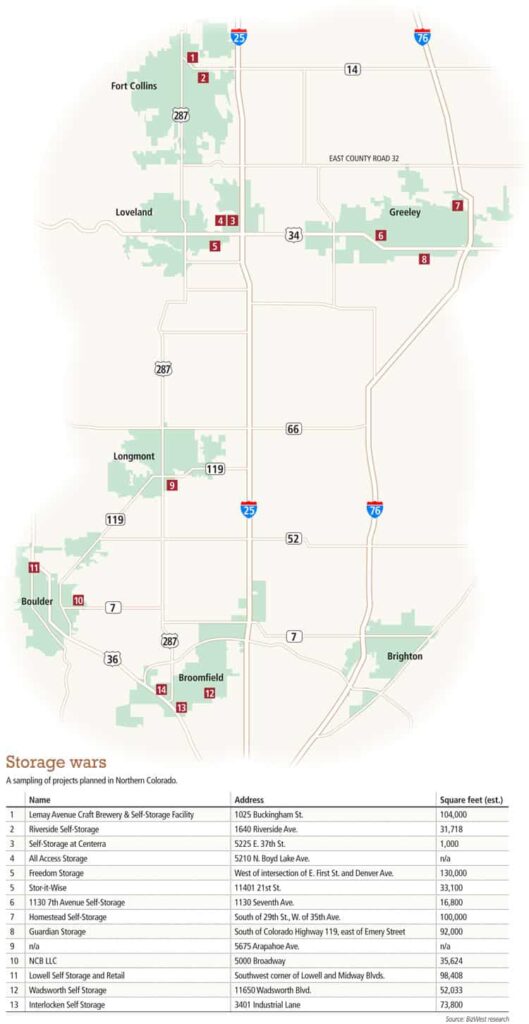 “Colorado absolutely is the best self-storage market in the country,” Ben Vestal, president of Aurora-based Argus Self Storage Sales Network, said in a recent speech to the Colorado Self Storage Association. Vestal’s speech, titled, “The State of the Colorado Self-Storage Market,” included statistics on rental rates, investments and developments in self storage.

In an interview, Vestal hedged only slightly from that claim: “I do believe it’s one of the best in the country,” he said.

Driving the boom are a number of factors, including:

• Strong population growth, including millennials who tend to use more storage facilities.

Vestal said millennials tend to rent apartments at a higher rate than the general population. Additionally, a tight apartment market, with escalating rents, means many renters are opting for smaller apartments, meaning that they need more storage.

“People that rent their dwelling, whether it’s a house or an apartment, are always better candidates for storage,” Vestal said.

Retirees and empty-nesters also make good customers, he said. Empty-nesters tend to downsize, requiring storage space, and retirees might also look to store their possessions — or have their kids store them on their behalf.

Add in a spike in the cost of living along the Front Range, including apartment and housing costs.

“Whenever that happens, people look to storage to fill the gap, if they can’t afford a bigger apartment of a bigger house,” Vestal said.

Vestal added that little if any new product — meaning, new storage facilities — came on the market along the Front Range during the economic downturn from 2008 to 2012. But the market has rebounded in a big way, with new projects and investment activity highlighting what can only be considered a self-storage boom.

Some projects are traditional mini-storage facilities, while others are catering to a higher-end clientele, such as Executive Storage at Crossroads, a 22-unit complex at 4005 MacArthur Ave. in Loveland. The project provides, heated, high-security storage for RVs, boats, personal car collections, etc., with rents ranging from $600 to $1,100 per month.

But the boom has been focused on development and investment in more-traditional storage facilities. The William Warren Group, a privately owned real estate company based in Santa Monica, Calif., in 2014 acquired a portfolio of six Colorado self-storage facilities for $33 million, including one in Louisville. The project, operating under William Warren’s StorQuest Self Storage brand, includes 522 units at 1200 Lock St.

Earlier that year, William Warren acquired a facility in Lafayette at 530 Stacy Court for $6.9 million.

Gary Sugarman, chief strategy officer and principal with William Warren, said the company continues to eye acquisitions around the country, as well as new developments, including in the Denver-Boulder area.

But all real estate is cyclical, and Sugarman keeps an eye on demographic and other trends that might portend a shift in the current robust market.

“Now, we’re at this moment where you have to be careful about all of the other projects in planning stages or under way so as not to oversaturate the market,” he said.

He noted that projects currently in the pipeline might take another year or two to develop — if they do at all. One project that had been in planning in Fort Collins, Silo Storage on East Vine Drive, would have encompassed 130,000 square feet, with hundreds of units, but a planner for the city of Fort Collins said the project has been withdrawn.

“What that means is that if you identify a development site today, you have to look forward as to what’s happening a year or to hence when you are opening your doors or beginning the leasing process,” Sugarman advised. “It behooves you to take a very close look at all of the projects within a three- to five-mile radius.”

Sugarman agreed with Vestal that two to three years might be an accurate assessment of how much longer the Front Range boom will last.

“We’re at the point where saturation is worth seriously understanding or looking at,” he said.

For Todd, entering the self-storage market has been a longtime plan. He first launched Fort Collins-based Alpine Moving Co. in 2011, with the express intent of opening a storage facility. But the economy wasn’t’ ready for additional storage at the time, so he had to wait for the market to rebound.

But he remains cautious. Although he’s confident of leasing up the first phase of the project, he’s prepared if the market turns before the second phase is completed.

“We can build at whatever pace we feel is necessary,” he said. “We don’t have to build another four or five hundred units. We can build a couple hundred.”

“Like anything, it’s cyclical,” he said, “and people will overbuild.”

He just doesn’t intend to be one of them.

Jordan Todd is racing against time — and real estate cycles.

The co-owner of Self-Storage at Centerra in Loveland is riding high since the August opening of the first phase of the project, including almost 500 units, at 5225 E. 37th St., and he’s looking to get the next phase out of the ground before competing storage projects are approved.

The fact that his project is fully entitled with the city is a plus, he said, whereas many other self-storage projects remain in development review. That gives him a leg up, as he prepares to launch…