FORT COLLINS – For Bob Flynn, the Mason Corridor project has been a very long time coming.

Flynn was a member of the Mason Corridor Citizen Lead Team that helped create the corridor’s original design about 14 years ago and is a resident of the Troutman Park neighborhood that sits adjacent to the corridor. He has been closely watching the sometimes glacial pace of negotiations between the city and Burlington Northern Santa Fe Railway to develop the five-mile transportation corridor.

But those negotiations have finally borne fruit, and an agreement between the two parties was signed in late March. Flynn said he’s happy to see the agreement signed but wonders why it took so long.

“I don’t think it was ever anticipated that it would take as much time as this did,” he said. “Overall, I’m glad and my hat’s off to the people who had to negotiate with the railroad and I think it’s a big step forward.

“I’ve always said this will be a showcase for the city and good for both transportation and economic development,” Flynn added. “But let’s keep it on the schedule we have now and not have any more delays.”

The $82 million Mason Corridor project – which includes a new rapid bus system called the Mason Express or MAX – has been in development since 1997, as the city has worked to design it, fund it and get a final agreement with the railroad to share Mason Street with bus traffic. 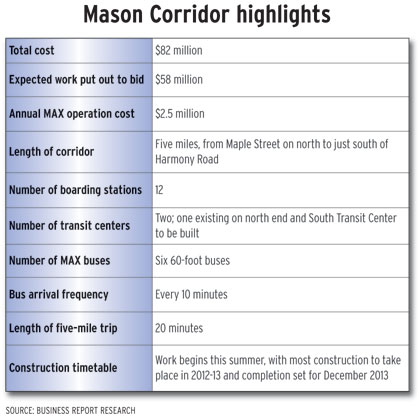 That final agreement, signed March 22, sets the project in motion. It starts with a $3.9 million payment to BNSF for an easement to build a concrete “guideway” for the city-owned MAX buses to run up and down Mason just east of the BNSF tracks.

City engineer Helen Migchelbrink said the project is mutually beneficial to both parties. “They (BNSF) want to replace their tracks because they’re in a state of some disrepair, and that’s something they’ll do at their own expense,” she said.

Lena Kent, a BNSF spokeswoman, said the railroad is most interested in improving safety in the corridor. In the downtown portion of the project, the railroad tracks will be separated from the roadway and Mason Street will become a two-way street, eliminating cars and bicycles crossing the tracks in the middle of a block.

“With this project, we’ll now have defined road crossings, and that will improve safety in that area,” Kent said. She also noted a new $1.4 million underpass to be constructed at Troutman Parkway and a $2.8 million overpass at the Natural Resources Research Center as other key safety improvements.

Kent said the railroad also insisted on the city passing a strict trespassing ordinance to keep people from crossing the tracks at unsafe points.

“We asked the city to enforce that you need to cross in designated areas and that if you don’t, it’s a crime,” she said.

Migchelbrink said about $58 million in construction contracts will be awarded for the infrastructure needed for the Mason Corridor. Some of that will likely go to local companies, she said.

“The whole thing will be bid according to federal rules,” she said. “This is a big project, and with these kinds of dollars and timeframe, I expect it will bring some big construction companies from out of the area, but also local suppliers for sure.”

Kent said the railroad expects to hire local workers to help with drainage and track replacement work, adding to the economic boost to be obtained through the project’s construction.

Migchelbrink said the city has been buying up properties along the corridor for construction of the MAX guideway, 12 boarding stations and the South Transit Center. She said a total of 44 properties need to be acquired and about half have been purchased in the last 18 months.

“That’s going great. It hasn’t been a problem,´ said Migchelbrink, who added the city has so far not had to exercise its power of eminent domain to acquire the properties, which are mostly very small.

It’s been estimated that completion of the Mason Corridor and the MAX bus system will potentially help create 2,800 new housing units and raise millions in new property tax revenue and millions more in economic development.

Josh Birks, the city’s economic development adviser, said the project is crucial to the city’s plan to help revitalize the midtown area near Foothills Mall.

“The Midtown Development Study assumes we will have this great piece of infrastructure coming in,” he said. “We see this as a tremendous opportunity to move that development forward.”

“Absolutely, there’s a big economic upside to this,” he said.

The Downtown Development Authority is also expecting the project to stimulate development and shopping in the downtown area. The DDA contributed $600,000 in 2007 to help leverage some state funding, which in turn was used to leverage federal funding.

“I think it’s going to be transformational,´ said DDA Director Matt Robenalt of the Mason Corridor. “It’s going to transform College Avenue’s ‘B-side face’ into another corridor for residential and commercial development.”

Robenalt said he’s already hearing buzz on the street about possible downtown business improvements and additions as a result of the BNSF agreement being signed.

“It brings it one step closer to reality,” he said.

Funding for the massive project will come mostly from the Federal Transit Administration, which has pledged $65.9 million of the total $82 million cost.

Migchelbrink said most of the rest of the cost is being paid by CDOT and through in-kind land contributions from Colorado State University. Only a small portion – including the $3.9 million paid to BNSF for an easement in the corridor – will come from city revenues, she said.

Migchelbrink said no train traffic will be stopped or redirected during the construction period and vehicle traffic allowed in the corridor now will still be allowed when the project is completed.

“Wherever vehicles travel today, there will still be vehicles allowed,” she said.

Migchelbrink said disruption of east-west traffic will be kept to a minimum during the two-year construction period.

“Prospect, Drake, Horsetooth and Harmony will be impacted, but we obviously won’t be working on all four intersections at the same time,” she said. “A lot of the construction (between the intersections) won’t impact anybody at all.”

FORT COLLINS – For Bob Flynn, the Mason Corridor project has been a very long time coming.

Flynn was a member of the Mason Corridor Citizen Lead Team that helped create the corridor’s original design about 14 years ago and is a resident of the Troutman Park neighborhood that sits adjacent to the corridor. He has been closely watching the sometimes glacial pace of negotiations between the city and Burlington Northern Santa Fe Railway to develop the five-mile transportation corridor.

But those negotiations have finally borne fruit, and an agreement between the two parties was signed in late March.…